The year 2020 is one that won’t soon be forgotten, and its impact will continue to be felt for years to come. From the global pandemic to the U.S. election, there seemed to be no shortage of events that brought volatility to the stock market and the economy as a whole. As social distancing became the norm, businesses sought to continue operating by adopting virtual meeting technology and enabling their employees to work remotely.

After the events of last year, it’s important to understand the current lay of the land, how the last twelve months have impacted the U.S. economy, and what we can anticipate in the year ahead. On January 15, 2021, our Vice President of Strategy, Mike Coffey, connected with S&P Global’s Chief U.S. Economist, Beth Ann Bovino, to uncover these insights.

Below are excerpts from that conversation, recorded prior to President Biden’s inauguration.

Mike Coffey (MC): Let’s start by discussing your outlook for 2021. With the Democrats getting control of the presidency and Congress, what do you expect to see with regards to policy and its impact on the economy, beginning with your view on taxation and the actual impact on corporate earnings?

Beth Ann Bovino (BB): So there’s a couple of factors. In terms of taxation, that is a structural policy decision or policy campaign proposal by Mr. Biden. We think that during the first year, Mr. Biden will focus largely on stabilizing the U.S. economy and stabilizing the health of the population. Those long-term structural policy proposals, such as taxation, will take a backseat as Mr. Biden focuses on getting this economy back on its legs. In terms of the tax policy that Mr. Biden has proposed, the raising of the corporate tax rate to 28%, let’s see where it lands. Indeed, he does have a majority in Congress, both in the House and in the Senate, but the Senate is a slim one, suggesting that there will be challenges for getting his tax policy through. Keep in mind that while it is higher than what we have right now, it is still well below where we were before the Trump Tax Policy Program was put in place. So indeed, it would hurt, but maybe not as much as one would expect.

MC: Most recently, Mr.Biden released his $1.9 trillion COVID-19 relief proposal and I’m interested to learn whether there’s anything in the plan that surprised you?

BB: I would say there are two things that I thought were interesting. One, it was a pretty large amount. Mr.Biden came out with his gloves off, I guess you could say, and in trying to attack the impact from COVID-19, and a lot of it is certainly necessary. I think the large proposal is almost a kind of line in the sand and it means that there will still be negotiations going forward. Also, state and local government finances stimulus were not addressed in December so that’s something that Mr. Biden has put in that proposal, and something we do think is sorely needed given state local governments do makeup 10% of U.S. economic activity. One of the bigger things I noticed he put in was a kind of “to-do” list, which included his plan to introduce policy measures for those long-term changes. Again, infrastructure is mentioned and other things that would be job creating, particularly climate change as well.

BB: Well, in our December forecast we had for 2020, we had a drop of about 3.9%. But, we’ll see what happens. We think that GDP will be around those numbers for 2021. We were looking at growth around 4.2%. It’s a lot bigger than that drop in 2020, but we do want to point out that we focus on levels, not necessarily percent changes because, given the size of the drop and the pandemic, the size of the gains in terms of percentage changes will also be large. So we focused on levels and, with that 4.2% increase in GDP for 2021, that still means we don’t get back to pre-crisis levels in terms of dollar terms, until the third quarter of 2021. If indeed Mr. Biden is successful in getting more of that stimulus through, we might be able to reach those levels a little earlier than we think. But still, it will take some time.

MC: I know there’s a lot that goes into these projections and a lot of assumptions have to be made, but what do you see as your biggest threats to your projections?

BB: Well, it’s promising that stimulus is being discussed, but let’s see if it gets through. Promises don’t necessarily mean policy. The second thing is COVID-19. It’s promising that we have vaccines and that the vaccines are starting to be available, but it’s still a long way to go. The time involved in the transmission of getting those vaccines to all the people in need could mean that COVID-19 will still be in charge. Another concern that we worry about is a trade dispute with China, which could very well be something that could topple the top of the applecart for the US economy. It’s something that we’re keeping an eye on as well.

MC: I know there’s been a pretty clear disconnect between economic growth and growth in the stock market since last April. Do you think we’re in a bubble?

BB: Well I think there’s a couple of factors that are at play with the equity markets. We have to say that equity markets are very forward-looking, so indeed they may be seeing beyond us, even beyond the COVID-19 surge in cases throughout the United States, and focus on the fact that we have a vaccine. That is very promising and is slowly but surely, getting out to the population so maybe that’s one focus they have, knowing that eventually the economy will come back and be on its own two feet. Another thing that supports the stock market is the stimulus that’s coming from the federal government. The liquidity that is so prominent across the markets is another reason to give equity markets a boost. Now, can we call it a bubble? Unfortunately, bubbles are always a hindsight approach. However, from a personal position, as I’m not an equity strategist, I am concerned with the size of the equity markets, certainly. But again, it will remain to be seen what actually comes out in the end.

MC: ESG is becoming a major focus for our corporate clients and I’m curious if ESG plays a role in your projection?

BB: ESG is certainly part of my work. I work at S&P Global Ratings and the ratings analysts have addressed, for a number of years, the fact of corporate governance. So that’s something that we already have embedded in our analysis on the rating side. As an economist, how do I look at that? I particularly look at the society factor, think about demographics. These are largely long-term factors that are at play in our economic analysis. But when we think about demographics, like women in the workforce, income inequality, or the aging population, that all is very much a factor in terms of how we estimate our long-term growth path for the United States. Because of demographics, the growth path for the United States about 15 years ago used to be about two and three quarters in terms of the trend growth rate. Now, because of demographics, it’s much lower, closer to two or under 2% at this point in time.

MC: I’d like to explore where you see the risk of recession in 2021 and what the key indicators are that you’ll be watching closely to give you an early indication that we might be heading in that direction?

BB: We’ve had for some time the risk of recession at around 25 to 30%. Now with the news that we have more stimulus possibly on the way, that does suggest that the risk of recession has dropped a little bit, maybe it’s closer to the 25% mark than the 30%. But again, it remains to be seen whether that stimulus can get out to those in need. In terms of the risks and the worries we have, one of mine is COVID-19. The spread of COVID-19 and the new strains of COVID-19 that are in the United States. That is a big concern in terms of quarantine measures. It’s not too long ago in April and in March, when we had over 90% of the U.S. population under some form of quarantine. We don’t necessarily think we’ll go back to those days, but we can’t rule out something significant in terms of quarantine measures. We were worried about premature fiscal austerity, but it doesn’t seem to be a risk right now, but we’ll see what happens. It is still a very slim majority of Democrats in congress. And we’re watching what happens with the trade disputes between the U.S. and China. Those three are probably front and center right now.

Watch the full interview with Beth Ann Bovino below to hear more about the economy, job growth, student debt, and the key indicators the team will be watching to determine if the new policies are working.

Vanessa Hartung is the Senior Content Marketing Manager at Q4, helping to lead the creation of content. As managing editor of the blog, Vanessa often collaborates with industry experts, partners, and company leaders to share meaningful insights with the investor relations and capital market community. She has been with Q4 for two years and has over a decade of experience working with innovative software and technology companies.

How Technology is Evolving Briefing Books

Read More
DData & Insights
While the US market has been firing on all cylinders, that hasn’t been the case for China. With… 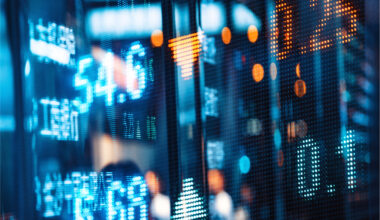