IROs, Stay Ahead of the Curve: Predicting Post-earnings Reactions 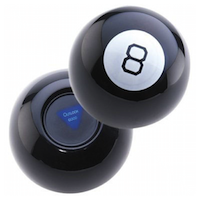 “It is far better to foresee even without certainty than not to foresee at all.”

–Henri Poincare in The Foundations of Science, page 129

Third Quarter earnings snuck up on us with dizzying speed last week. Didn?t we just report results? According to our Director of Global Derivatives, Ken Keating, the ?Most wonderful time of the year,? kicked off in interesting fashion last week.

Ken issued multiple alerts last week, but none more important than the earnings forecasts. I am sure every IRO reading this blog has gotten the question from senior management, ?Where do you think we will trade after the earnings call??

As an IRO, how do you answer that question? Ouija board? Magic 8 ball? Dartboard? At Q4 we leverage many proprietary algorithms and databases to determine not only what is expected after reporting results, but also to gauge market sentiment before the release.

Let?s take a look at a couple of these recent examples?

Alcoa was set to report earnings on Thursday night (10/8) after the close. On Wednesday (10/7) Ken ran the screens for AA and determined that the market was pricing in a move of +/-6.2% vs. the average 8 quarter earnings move of just +/-3.5% – nearly a 45% jump in expected volatility (clearly the market was pricing in an outsized move). What was even more interesting is that even though Alcoa?s stock price had been trending higher heading into numbers, Q4?s proprietary Sentiment Indicator had turned negative on 10/5, and by the time Thursday (10/8) rolled around it was very bearish heading into the release – clearly indicating that despite the outward appearance of bullishness (if the stock price was the proxy) heading into numbers, The Street had slowly turned quite negative on AA as their 10/8 earnings report drew near. When the shares opened for trading on Friday morning, after reporting numbers the night before, Alcoa fell dramatically, losing nearly 7% on massive volume. ?See Alcoa price chart and Q4 Sentiment Indicator screenshot below… 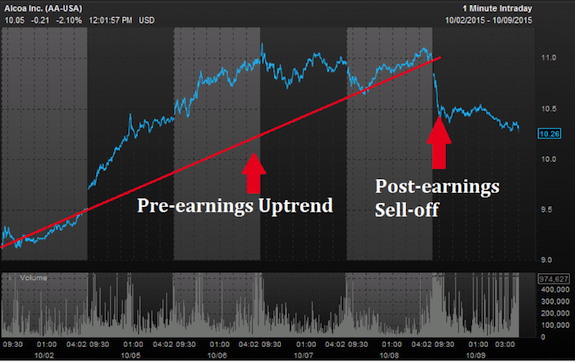 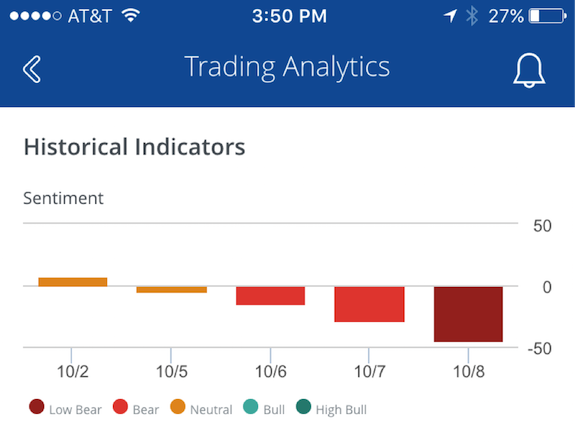 Another example Ken provided this week was Domino?s Pizza. On Wednesday (10/7) Ken issued a report that indicated traders were bracing for a +/- 5.8% move vs. the average +/-4.7% post-earnings move we have seen over the last 8 quarters – nearly a 25% increase in expected volatility.? DPZ?s stock had been stuck in a sideways trading range entering the week, but Q4?s Sentiment Indicator had turned negative on 10/2, and was becoming more bearish as the week wore on. Q4?s Volatility Indicator had also started to flare up heading into DPZ?s earnings release as well (see screenshot from our Q4 Touch mobile app below). On Thursday morning (10/8), DPZ released results and the stock came under heavy selling pressure, dropping 7% at one point during the day. The stock managed to pare some of those early losses thanks mainly to a broad market afternoon rally which saw the Dow gain nearly 140 points, but still, despite the broader strength in equities, DPZ closed lower by 5% that day.

I believe Quantitative Analysis provides immense value and key measurements that every IRO should know heading into earnings. Predictive Analytics such as Sentiment Indicators, Volatility Estimates, Expected Moves, etc., empower the IRO with? forward-looking metrics which enables them to more accurately message their earnings release, and better prepare Senior Management for the conference call.

I suspect every IRO knows their earnings estimates and all of their analysts? price targets heading into numbers, but I truly doubt many are aware what the market is actually pricing in, and furthermore, how those expectations compare with previous releases. With Q4?s Market Intelligence solutions, It is like having the answer key before you take the test.

I challenge IRO?s to start thinking about looking forward, not backward, and leverage best-in-class intelligence to track stock sentiment, volatility and expectations. Quantitative Analytics give you the advantage of being able to use the facts from the past with insight into current investor behavior to address potential risks before they occur. IROs, it?s time to Stay Ahead of the Curve?!

What is the market pricing in for your stock? How has sentiment shifted in the final days/weeks heading into numbers? How is the stock likely to react to various earnings outcomes?

If you?d like to see the answer key shoot me an email at mikec@q4websystems.com and I?d be happy to send you a complimentary pre-earnings analysis.?

Why True Market Surveillance Is More Science than Art