Expect the Unexpected: How to Plan for a Crisis

Activist Investors Back in Full Force in 2021

Last week I had the privilege of leading a panel discussion for an IR Magazine sponsored Think Tank in NYC. While we covered an array of topics, what I found most interesting was to discover how many IROs have taken notice of the option marketplace. ?I am admittedly a?relative newcomer to the investor relations community, but I have over 20 years experience in the capital markets ? specifically option trading and market making. Over the past two decades my career has taken me from a junior option trader, to running my own specialist post on the floor of the Chicago Board Options Exchange (CBOE), to co-founding several companies, including a proprietary trading firm (with a focus on derivatives trading), a ?Fin Tech? firm focused on meeting the technological needs of hedge funds, banks and trading firms, and eventually, Oxford Intelligence Partners (which was recently acquired by Q4).

About two years ago, when I stepped away from the trading desk to co-found Oxford and first started talking with IROs, I could clearly see how the tools and knowledge I?ve gained in the options world could easily spill over into the investor relations community. The overriding theme I kept hearing at first was that IROs didn?t care about options, or didn?t fundamentally understand them, and they certainly were not benefitting from any intelligence behind the impact options were having on their common stock.

As I sat up there on that Think Tank panel last week, however, I quickly realized how far the industry has come in just the past two years! IR Magazine is now running Think Tanks on the subject, it has been a major focus at several NIRI events in recent months, including at NIRI National earlier this year, and we at Q4 are now seeing IR professionals consider it Best Practice to incorporate some level of options trading intelligence within their IR Program. It?s my belief that IROs have a much better understanding today of just how ubiquitous option strategies have become within the institutional community, and how vital the intelligence gleaned from this seemingly nebulous market is. Simply monitoring the common equity is no longer enough, and IROs are looking for that total 360? view of their entire capital ecosystem.

??the attractiveness of the inherent leverage and anonymity of the option markets make it a proverbial breeding grounds for many of today?s largest Activist Investors.??

So just why exactly have options become so in vogue? I believe it has to do with their wide-spread proliferation and popularity amongst sophisticated institutional investors and traders over the past decade or so ? check out the graph below which illustrates the dramatic increase (both relative and absolute) in option trading volume vs equities.?Since 2008 option volumes have increased by 21%, vs. a 50% contraction in NYSE volumes. 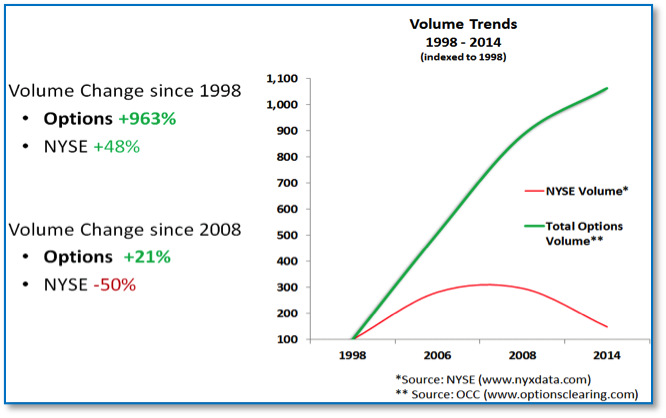 Not so long ago the option markets were extremely illiquid, making it difficult to establish any meaningful position at a price that was appealing. Fast forward to today and those same derivatives markets can often be more liquid than the underlying common equities themselves. It?s an interesting phenomenon when the demand in the options marketplace has created an environment where the derivative is more liquid than what they are deriving their pricing off of. Today?s option trading environment offers a meaningful way to establish a large, leveraged position without having to give up too much edge. ?This allows investors, from the small proprietary trading firms, to sophisticated hedge funds, and even vanilla, long-only funds, to more precisely (and cost-effectively) hedge exposure to things like: ?company-specific risk, commodity risk, interest rates, geopolitical risks, business cycles, etc. Furthermore, the attractiveness of the inherent leverage and anonymity of the option markets make it a proverbial breeding grounds for many of today?s largest Activist Investors.

I think the difficulty now for IROs is extracting the meaningful option volume from all the noise that goes alongside it. Just like their associated common stock, there are high frequency traders that are trading options as well. They represent a significant amount of the option order flow. However, it?s the process of wading through all the noise which will give the IRO that 360? view they are looking for. It?s the willingness to continue to adapt with the changing market environment that will provide IROs the intelligence they need regarding the over-all health of their company?s capital structure and enterprise value. Armed with the proper quantitative tools and industry know-how, it is possible for firms like Q4 to apply Big Data Analytics to the options marketplace to uncover valuable, actionable insights that until now have escaped the IROs? desk. A truly innovate Options Intelligence partner can empower IROs with actionable intelligence and predictive analytics, powered by sophisticated quantitative models that will: 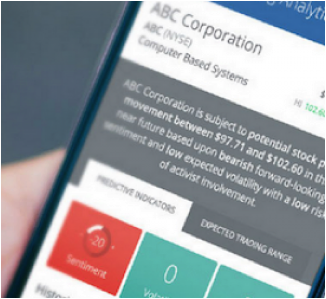 I walked away from IR Magazine?s Think Tank pleasantly surprised at how many people are now paying attention to the options marketplace. The fact that there are now many hosted events for the IRO community around options is a telling fact on its own. The most impressive part, however, may just be the newfound eagerness of the IRO community to not only subscribe to, but act upon the intelligence garnered from options – what it is telling them about the pricing, expectations, sentiment and driving forces of their common equity shares.

IROs, Stay Ahead of the Curve: Predicting Post-earnings Reactions

Current Market Structure and the Rise of Quantitative Analytics for IROs