Make Your Sell-side Earn Their Pay

How Small-Caps Are Surviving Post-Pandemic

How to Deliver Valuable Investor Insights to the C-Suite

Last week Carol Wolf, former Bloomberg reporter and regular contributor to the Q4 blog wrote about how the Q4 Activism Alarm (AA) had picked up an interesting trend in potential increased activists accumulations in General Electric (GE). With the 13F filings now available, it?s clear that our system was ringing for GE for good reason. 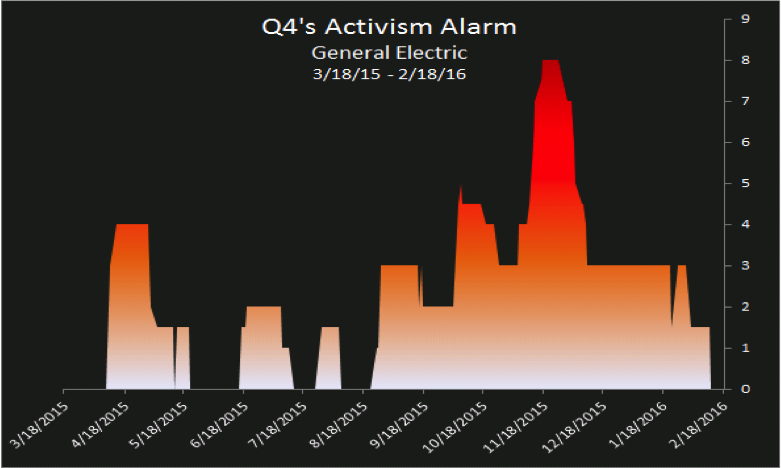 What was interesting is that from the end of September through the end of November, we saw GE?s AA score spike to a level of 8 (0-10 scale; ?>6 indicates high likelihood of activist involvement). Since its November 25th high of 8, however, our AA indicators have progressively lessened, ending the year at 3, and currently sitting at 0. In part, this shows the sensitivity of the AA itself – as it is a real-time order flow analytics solution for monitoring activist trading, not an ?At Risk,? or ?Vulnerability? score. In other words, our algorithms are constantly monitoring real-time trading in search of ?activist footprints? and pattern recognition signals. When activist investors are actively engaged in the open market, the AA rises, and conversely, as activists start to pull back the throttle on their buying (or if they sell), the AA decreases.

In looking at the quarterly 13F filings by institutional investors for December 31, which came out this past week, we note several interesting findings. First off, and most notably, Trian Fund?s position, as of December 31, was reported to have decreased by approx 12m shares, to 78m. However, Deutsche Bank Securities (broker/dealer) reported a net increase in its GE stake of 11m shares, up to 13m from 2m – previously its largest ever quarterly purchase in GE was 2.6m. This increase, if taken at face value, would have made a broker/dealer (Deutsche) the second largest buyer of GE shares in 4Q15, which would be highly unusual for a widely held ?blue chip? company like GE. For example, the next largest broker/deal purchase in GE in 4Q15 was JPMorgan Securities LLC with a mere 1.45m share net increase.

Deutsche Bank has been an on-going shareholder in GE in each and every quarter for the past 11 years. Interestingly, however, over that entire time Deutsche never held more than 5.8m shares (only held >4m shares 7 times over the 44 quarters), and its average holdings in GE over the past 44 quarters has been approx 2m shares. We believe it is quite possible, if not likely, that the 11m share increase Deutsche Bank reported in GE is not actually the result of open market purchases for its own accounts, but rather the result of SWAP agreements with a third party institutional investor.. 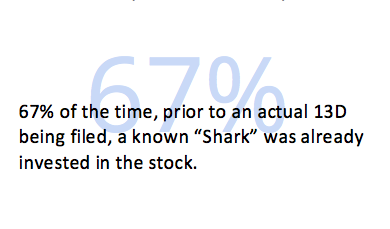 Our rigorous quantitative backtesting research suggests that it is actually more the norm, rather than the exception, to see multiple activists flow into a stock following the emergence of the ?first major activist.? In fact, our analysis suggests that 67% of the time, prior to an actual 13D (activist campaign) being filed, a known ?Shark? was already invested in the stock. In other words, contrary to popular belief, many activist campaigns don?t come out of nowhere, but actually occur one or more quarters after a known Shark has initially entered the waters.

When looking more indepthly at the 4Q15 GE 13F filings, one notices a definite uptick in the amount of known activist investors, and known activist ?sympathizers.? Names such as Passport Capital, OppenheimerFunds, ClearArc Capital, Hermes Investment, Wolverine Asset, SIT Investment, Sprott Asset, and others all added to, or took new positions in GE in the quarter. In total, approx 12.5m shares were purchased by activist/sympathizers last quarter, which represents approx 7% of the 180m shares purchased by institutional investors. And this does not even take into account the aforementioned 11m shares bought by Deutsche Bank Securities – which again, may have very well been SWAP-related.

As one can see, while Trian Fund may have appeared to sell roughly 12m shares in 4Q15 the 13F?s show that activists/sympathizers were definitely still piling into GE shares in final 3 months of the year – most likely in October and November, based upon our analysis. Since the early part of December, however, we have seen our AA scores diminish all the way down to 0, indicating to us that the velocity of activist buying – at least for now – seems to be behind GE. What will be interesting to see, and something we will certainly be monitoring closely in the weeks and months to come, is how long do all these collective activists/sympathizers – which in total now own somewhere north of 700m shares of GE (~7% O/S) – continue to sit idly by before pushing for some kind of agenda?

Why Options Are Critical in Stock Surveillance and Market Intelligence