Bitcoin, ICOs and STOs: Is this the new world for investor relations?

Cryptocurrencies like bitcoin, along with their underlying blockchain technology, are undoubtedly among the most critical and disruptive trends of this decade. From banking to capital markets, the overall economy is adapting to this new model and gearing up for its impact. While the debate continues as to whether and when these new forms of currency will become mainstream, it’s clear the world is changing quickly. (Did you know, Sweden just announced the creation of one of the first government backed crypto coins, the e-Krona?)

Many derivatives have stemmed from Bitcoin. One of the most compelling versions, Ethereum, was first conceived by a young programmer in Toronto named Vitalik Buterin in 2013. He combined the ideas of Bitcoin’s blockchain with the concept of a “smart contract,” that enables applications to be built into the blockchain and executed according to a set of rules. The smart contract approach opened the potential of the blockchain from being just currency focused to a wide range of possible uses. This helped drive the boom of Initial Coin Offerings (ICO), which took off in 2017 and continues to make waves in 2018.

According to Coinschedule, over 210 ICOs raised $3.8B in 2017, and as of April 2018, another 195 raised $6.175B. While still small compared to the $159B raised in the US IPO market in 2017, if the trend continues, it has the potential to dramatically change how companies raise capital in the future.

When a coin is issued (and if it’s not a currency), it’s typically either a utility coin or a security token. The idea of utility coins, like the popular Filecoin (a network of buying and selling data storage on devices), represents a successful back and forth paid utility. Whereas “security tokens” function more like a security in which holders participate in the rising value of the token; based on trading of the token and/or the growth of the underlying business.

Utility coins and security tokens are still developing, but the fact remains that both have tremendous power to speed the transfer of value between users in a secure and reliable way, which hasn’t been possible until now. While this represents an exciting new opportunity, the main problem is that an ICO today is essentially a security, which needs to operate within the SEC’s regulatory framework. Security Token Offerings (STO) have the potential to work in this new framework, but we’re still a far way off before these are fully endorsed by regulators. I’ll leave this discussion to those far more qualified than me.

Personally, my view is that the trend is undeniable. I don’t believe crypto is a fad, which will fade into the history books. It’s here to stay and we are at the beginning of a major transformation. How it evolves is the big question. But I have no doubt about its lasting change.

With close to $10B raised through ICOs in 2017 and 2018 YTD, crypto is drawing significant attention from all existing capital market participants, because of its ability to create a new market outside of the traditional capital markets. In fact, it’s already happening. Massive online exchanges such as Coinbase, Bitfinex and Kraken are seeing large numbers of buyers and sellers trading coins like they do stocks.

It’s evident that all capital markets stakeholders won’t just sit by and let the crypto market evolve without them. Financial desktops like Bloomberg and their competitors are already including crypto pricing (not to mention CNBC constant coverage). We’re just one step away from crypto trading going mainstream. How long will it be before your personal bank offers it? Worlds are obviously colliding.

I’m often asked: what does this mean for investor relations? Above all, it’s critical that anyone working in the capital markets understands these trends and their disruption to the space, both today and in the future. Dismissing crypto is a mistake, unless you want to find yourself irrelevant. Understanding cryptocurrency, utility coins and security tokens are critical to maintaining relevancy and creating value as this new world evolves all around you.

Ultimately IR is about finding, attracting and retaining the investors that are the best fit for your company. As crypto grows, the reality is the form of that investment may come as a security token, rather than a stock. Understanding and being a part of these trends is critical to guiding your company, your management team and your own career.

It may still be early to take this view for the IR market, but the future seems pretty clear to me. Now go launch your STO!

This article is the first of a three part series on cryptocurrency’s impact for investor relations.

Darrell Heaps is a serial entrepreneur who has spent his career building software companies. As the CEO and founder of Q4 Inc, Darrell has led the company’s vision and strategy to become a recognized leader in the IR space. You can also follow him on Twitter @darrellheaps.

5 Questions your company should consider before GDPR goes into effect

Targeting tips from a surveillance analyst

Read More
FFeatured
The year 2020 is less than two months away, which means it’s time to get planning your next… 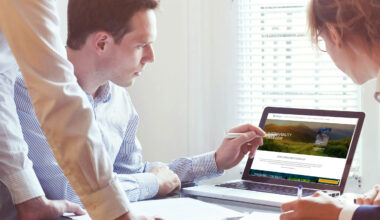 Read More
FFeatured
Investors are taking a growing interest in the environmental, social, and governance (ESG) performance of the companies they…