How the rise in passive investing has changed the IRO landscape.

Passive investing is on the rise and becoming more and more mainstream. From Fidelity’s recent entrance into the Smart Beta ETF space, BlackRock’s announcement of moving to robo-managers, and Vanguard’s use of robo-advisers within its high net worth managed accounts, computer programs and algorithms are quickly becoming extremely important in the portfolio management process.

Since the very first mutual fund (Massachusetts Investors Trust, which eventually became MFS) opened its doors in 1924, investors have been drawn to the idea of pooled assets being actively managed by a centralized Fund Manager. Constantly in search of diversification and higher risk-adjusted returns, investors have long looked to actively-managed mutual funds for the answers. For a number of reasons, including the proliferation of individually-managed retirement accounts (IRAs, 401(k)s, etc), mutual fund popularity surged in the 80s and 90s. And while index funds such as Vanguard’s flagship S&P 500 Index Fund certainly benefited from this influx of new capital, the vast majority of mutual fund flows went into actively-managed funds. This phenomenon, coupled with the great bull markets of the 80s and 90s fueled mostly by high-growth tech stocks, gave rise to “rockstar” fund managers such as Bill Miller, Peter Lynch, John Neff and others. It truly was the golden era for active fund managers.

Today we see a much different story. With asset classes across the globe more highly correlated than ever, and active managers struggling to beat their benchmarks, investors are looking for more efficient ways of deploying capital. 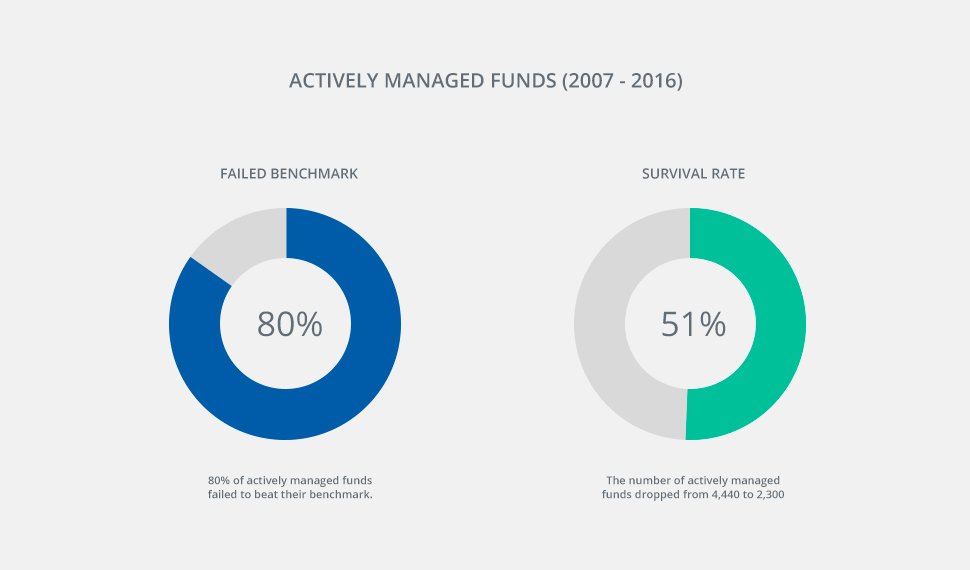 In 2016 alone, passively-managed funds saw net inflows of $563 billion, while their actively-managed counterparts saw net outflows of $326 billion. Passive funds “grew” at almost twice the pace as active funds “shrank” last year. And this has been ongoing (quietly behind the scenes) for the past few years. In fact, since 2000, passive funds have seen net cumulative inflows of more than $2 trillion, while active fund net flows, over the same 16-year period, have only increased by $1.2 trillion (with net outflows in the past three years).

It is important to note that while all index funds are passively managed, not all passive investing is indexed. In this new world, where quantitative models and sophisticated algorithms make stock recommendations – or outright buy/sell decisions – we are seeing a paradigm shift. Those “rockstar” money managers of the past are now being replaced by computer programs. In so-called Smart Beta ETFs for example, baskets of stocks are built in much the same manner as in an indexed-fund, except that these baskets are not benchmarked against a specific index, nor are they necessarily market-cap weighted at all — and they can change their weightings, or ownership as the programs see fit.

Corporates need to adapt to the new normal

For IROs looking to adapt and keep up with the rise in passive investing, survival lies in the ability to leverage data to tell a story and intelligence to interpret what the “machines” are doing.

Today, corporates are facing a unique opportunity in how they engage their stakeholders and communicate their message effectively by harnessing data. Unlike the active investor, machines don’t care about a sector, who your CEO is, or even your qualitative story. These programs have one purpose – to ingest as much data on securities as possible and to then make a recommendation based upon an extremely detailed and elaborate analysis of the data.

We can’t fabricate data. This is obvious. What we can do, however, is share specific data sets or KPIs that illustrate the story we’re trying to tell. Firms such as UPS, FedEx and Salesforce.com are taking this strategy to heart and showcasing KPIs and other data prominently on their IR websites. Data will always tell an easy-to-digest story.

It’s one thing to produce data; but IROs need to consume it as well. At Q4, we’re already ahead of the game and proactively providing corporates with actionable intel around passive investing trends and forecasts. For instance, do you, as an IRO, know who the market considers your peers? Sure, you know the companies with which you compete in the marketplace. But are you aware that there are other, seemingly unrelated companies, with whom the markets are comparing you to?

Additionally, do you know the data sets the machines are focused on, and why they are driving enterprise value for your company? And while you likely know how the sell side views your performance heading into quarterly results, are you tracking what the buy side is betting on, and how they are positioned heading into earnings? These are vital questions and the answers have real consequences.

Historically, technology has positively impacted our world, and with every new advancement, a transformation takes place that alters how we live, work, and even consume services. Take artificial intelligence for example: its growth is unprecedented, and will only continue to rise. Such advances in technology facilitates the amount of data available at any given time, which is quite powerful and can provide actionable intelligence for IROs. This is the new reality, and embracing it is key for IROs looking to stay ahead of the game. The rise of AI, machine learning and big data have opened the door for new frontiers that are still being born of their roots, and data analytics and the intelligence gathered from it has forever changed the way portfolio management will be pursued.

Adam Frederick is the senior vice president of intelligence at Q4 Inc and blogs regularly about surveillance and its applications for IROs.